Have Asthma or COPD? You Could Have a Higher Risk of Rheumatoid Arthritis 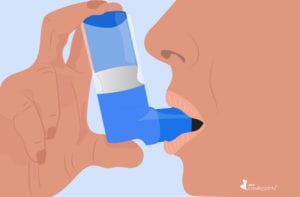 You may have already heard that people with rheumatoid arthritis (RA) are more likely to develop the serious lung disease chronic obstructive pulmonary disease (COPD), which makes it increasingly difficult to breathe. In 2017, Harvard researchers examined data from the huge Nurses’ Health Study and found that women with RA were about 68 percent more likely to develop COPD.

The group also analyzed the risk after adjusting for smoking (a well-known risk factor for both conditions) and a variety of other lifestyle factors. The risk of RA for women with COPD was still increased by 89 percent and the risk of seropositive RA was still more than double, which suggests that the connection between the two disorders is at least partially independent of common lifestyle factors and needs further explanation.

The association of COPD with seropositive RA was most pronounced in the subgroup of women who were over 55 years old and were current or ex-smokers, who had 2.7 times the risk.

While the 2017 study found no increased risk of developing asthma in women who already have RA, the new study (which looked at 196,409 women) did identify a significant (but smaller) increase in the risk of RA among women who already have asthma. Women who reported asthma were 67 percent more likely to develop RA and 51 percent more likely to develop seropositive RA. The percentages were lower but still significant — 53 percent and 42 percent — after adjusting for smoking and other factors.

Just as rheumatologists have been advised to promptly investigate lung symptoms that occur in people with RA, the new study suggests that the possibility of RA should be on the minds of physicians when people with lung disease develop joint pain.

Further study may lead to identification of overlapping factors that increase the risk of both lung and joint symptoms — perhaps common genes, autoimmune factors, or inflammation itself — and to underlying mechanisms that they may have in common.

In the study abstract, the researchers conclude that “identifying asthma and COPD patients as at-risk populations for RA can help develop prevention and screening strategies as well as provide insight into the role of chronic airway inflammation in RA pathogenesis.”

If you are diagnosed with arthritis or another musculoskeletal condition, we encourage you to participate in future studies by joining CreakyJoints’ patient research registry, ArthritisPower. ArthritisPower is the first-ever patient-led, patient-centered research registry for joint, bone, and inflammatory skin conditions. Learn more and sign up here.