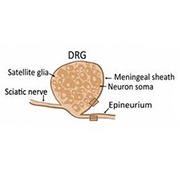 An obscure protein has emerged as a key control point in immune cell infiltration of the dorsal root ganglia (DRG) and peripheral nerves after injury. The protein, a protease inhibitor called peptidase inhibitor 16 (PI16), had no previously known role in pain and was found only in fibroblasts. This study thus places fibroblasts among the ranks of non-neuronal cells that play a role in chronic pain – and could potentially be targeted for treatment.

The work comes from Annemieke Kavelaars and colleagues at the University of Texas MD Anderson Cancer Center, Houston, US, and appeared March 10, 2020, in PNAS.

“It’s a very cool story, and the results are very important – that this is a critical upstream regulator of immune cell infiltration into injured nerve and DRG,” said Peter Grace, a neuroscientist also at MD Anderson but who was not involved in the current study.

Marzia Malcangio, a neuroscientist at King’s College London, UK, who was also not part of the new research, called the work “timely and very interesting.” Summarizing the findings, Malcangio told PRF that “the authors provide very good data suggesting that, following nerve injury, fibroblasts in the DRG secrete this PI16 protein that promotes migration of immune cells across the endothelial barrier. And we know that monocytes and macrophages release cytokines once they’re in the tissue and they sensitize neurons, amplifying noxious signaling.”

Kavelaars and colleagues had previously found that mice lacking G protein-coupled receptor kinase 2 (GRK2) develop persistent pain, and they wanted to investigate changes in transcription associated with GRK2. They started by using RNA sequencing (RNA-Seq) to compare the gene expression profiles of wild-type (WT) mice and those heterozygous for Grk2. They collected whole DRGs, including their meningeal sheaths, five hours after injection of prostaglandin E (PGE) in the paw, a model of short-lasting inflammatory pain. Wild-type mice recover from PGE injection after a few hours, whereas heterozygous Grk2animals display pain behaviors that last several weeks.

Kavelaars chose the PGE injection, she said, because “it’s not such a harsh model where you change so much, and we know there’s a nice window in time where wild-type animals are in recovery. That’s when we did the RNA-Seq.”

After PGE injection, WT and Grk2 heterozygous mice differed from one another in expression of only five genes, including Pi16, which codes for a little-known member of the highly conserved CAP superfamily of proteins, for Cysteine-rich secretory proteins, Antigen 5, and Pathogenesis-related 1.

“The way they discovered this novel protein using unbiased gene transcription profiling was very powerful, and it helped them to identify something that you wouldn’t arrive at normally without going on a fishing trip,” Grace said.

In selecting PI16, the team focused on novelty. “Often in RNA-Seq studies, people go after the pathway we already know about,” Kavelaars said. “We all thought, ‘let’s do something really novel, where there’s not much known.’ And it’s very highly conserved between species,” she added.

PI16 had never been investigated in the context of pain, so the researchers first tested whether it played a role in spared nerve injury (SNI), a model of neuropathic pain. Loss of PI16 was protective against persistent pain; WT mice with SNI displayed mechanical allodynia that was significantly attenuated in Pi16 knockout mice.

Having established a link between PI16 and persistent pain, the researchers wanted to determine which DRG cells contained PI16, fully expecting to find it in neurons. But immunofluorescence showed that the protein was expressed not in neurons or glia, but only in fibroblasts in the DRG meninges and in the epi/perineurium (two of the layers of connective tissue) surrounding the sciatic nerve. They saw PI16 expression in human DRG samples, too.

At first, Kavelaars said, “I was really disappointed to find it’s not in the neurons.” In hindsight, it was serendipitous to include the ganglia meninges in the RNA-Seq experiments that yielded the Pi16 gene.

Chas Bountra, a neuroscientist at the University of Oxford, UK, who was not involved in the study, said the lack of PI16 in neurons could be an advantage.

“Here you’re talking about something that isn’t in neurons, isn’t in microglia or immune cells, and it was in fibroblasts – peripheral cells. I found that really intriguing,” he told PRF. Because PI16 is peripherally restricted, it might present a “safe and clean” therapeutic target that wouldn’t affect the central nervous system.

First author Pooja Singhmar then set about trying to determine what sort of role PI16 might play in pain following nerve injury.

“It takes a Pooja [Singhmar] to do this work, where everything is unknown, you don’t know what the protein is, what it does, and there’s no guarantee you’ll find something interesting,” Kavelaars said.

“The work is very painstaking in trying to identify the function of this protein when very little is known about it,” said Grace, expressing a similar sentiment.

Following nerve injury, immune cells are known to infiltrate the DRG and injured nerve. After SNI surgery, PI16 expression increased in fibroblasts around the ipsilateral sciatic nerve and DRG, but not in neurons or glia; nor did PI16 increase in resident leukocytes already in the DRG. (Leukocytes include monocytes, which can differentiate into macrophages.)

How did upregulation of PI16 affect the DRG? To find out, the researchers again used RNA-Seq to compare transcription patterns in WT and Pi16 knockout mice after SNI. As expected, SNI resulted in gene changes in canonical pathways associated with neuroinflammation, but proinflammatory cytokine genes were upregulated to a lesser degree in the knockouts compared to WT. Further analysis of the transcriptome revealed that genes associated with immune cell migration and cell motility differed significantly between the mice, pointing the investigators to look at leukocyte migration and infiltration. After SNI, Pi16 knockout mice had fewer macrophages in the DRG and sciatic nerve than did WT mice.

Delving in further, the researchers knew that endothelial barrier permeability is regulated by myosin light chain kinase (MLCK) and its phosphorylation of myosin light chain (MLC-2). RNA-Seq analysis showed that Mylk, the gene that encodes MLCK, was downregulated in Pi16 knockout mice after SNI. In addition, the knockouts did not display the increase in phosphorylated MLC-2 seen in the ipsilateral DRG of WT mice after SNI. Importantly, MLC-2 was found in endothelial cells close to PI16-containing fibroblasts.

Finally, following intravenous injection of a fluorescent tracer, Pi16 knockout mice showed significantly less accumulation of the dye in sciatic nerve compared to WT mice after SNI. This demonstrated that the SNI-induced increase in permeability depended in part on PI16.

So how does PI16 contribute to neuropathic pain?

The evidence suggests that PI16 signals to endothelial cells via MLCK and MLC-2, resulting in increased permeability of the blood-nerve barrier and allowing circulating immune cells to infiltrate the DRG and nerve.

“That gets the immune cells into proximity to the nerve, so they can then engage in that immune-to-neuron communication, releasing cytokines and other mediators that then excite those sensory neurons,” Grace said.

“Peripheral nerve injuries are associated with an increase of nerve-blood barrier permeability – we knew that,” Malcangio said (see, e.g., Lim et al., 2014, and Reinhold and Rittner, 2020). “The novelty here is that the PI16 protein is only in fibroblasts, making them yet another cell type that may be targeted for pain treatment.”

Whether PI16 can indeed be targeted to resolve neuropathic pain will depend on its precise role in initiating – and perhaps maintaining – chronic pain.

“There might be a critical window to affect the immune infiltration via PI16,” Grace said. “Once the immune cells are there, they may release other mediators that could alter the barrier permeability further. So it may be that PI16 is only an effective early target and not in later stages.”

Malcangio also expressed concerns about whether targeting PI16 could be an effective treatment for ongoing pain, but that this could be tested.

“The issue with neuropathic pain, once it’s established, is that you need targets that are critical in the reversal phase. Because once that barrier is breached, as it is after peripheral nerve injury, it would have to be resealed. One would have to perform experiments to test whether inhibition of PI16 somehow would result in reduction of pain when the barrier is breached. It is a mechanism that will be worth investigating.”

That is one of many unanswered questions about PI16, such as what is its connection to GRK2?

“The short answer is, we don’t know the link between GRK2 and PI16,” Kavelaars said, but she plans to continue investigating PI16 as a player in chronic pain.

Stephani Sutherland, PhD, is a neuroscientist and freelance journalist in Southern California. Follow her on Twitter @SutherlandPhD