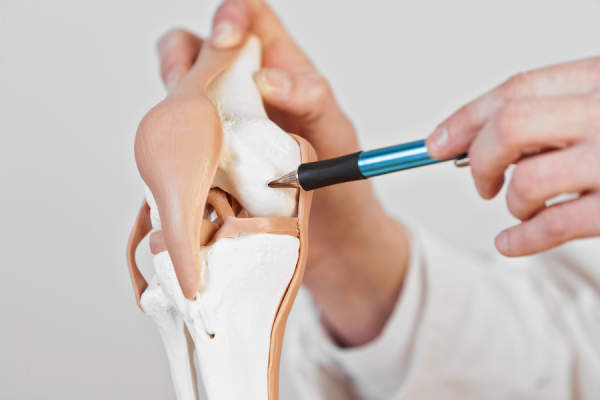 NEXT
iStock
If your joints are achy and sore the day after a long jog or a particularly taxing workout, it’s easy to pinpoint the cause. But when stiff fingers turn opening a pickle jar into sheer torture, or creaky knees make climbing the stairs in your own home difficult, it's likely a lot more than an overactive afternoon that's doing you in. Sometimes, the cause has nothing to do with exercise at all: Many common chronic conditions can contribute to joint pain. Here’s how to spot—and treat—them.
iStock
The Condition: Osteoarthritis
Around 30 million Americans suffer from this condition, where cartilage in the joint breaks down, leaving bones to rub painfully against each other. Risk rises with age, but nearly 14% of people over 25 already have it.
The fix: If you’re carrying extra pounds, losing just 5% of your body weight can significantly reduce cartilage degeneration. Also, swap high-impact workouts for activities like swimming, and try yoga: People who take up the practice report less pain in eight weeks.
iStock
Condition: Rheumatoid Arthritis
An autoimmune disease that causes chronic inflammation, RA is characterized by stiff, swollen joints that often appear between ages 30 and 50 and affect 1.5 million people.
The fix: Finding the right medication can be trial and error, but DNA profiling could soon change that. Researchers are using genetic information from joint tissue to match drugs with patients. In the meantime, add turmeric and omega-3 fish oil to your diet to help with stiffness.
iStock
Condition: Gout
An inflammatory condition caused by a buildup of uric acid crystals in the joints—especially the big toe—gout leads to intense pain and swelling. About 4% of adults have been diagnosed with the condition.
The fix: Along with meds, try keeping burger-and-beer nights to a minimum, since red meat and alcohol contain purines, a compound that breaks down into uric acid in the body. And swap cherry tomatoes for plain old cherries—tomatoes can increase gout pain while cherries are known to reduce it.
iStock
Condition: Lupus
Lupus is an autoimmune disease most often seen in young women in which the immune system attacks healthy cells by mistake. More than 90% of people with lupus experience joint pain.
The fix: Lupus symptoms can affect your whole body—skin, heart, brain, and nervous system. You’ll need to work with your doc to come up with the best mix of medications and lifestyle changes to keep flares to a minimum and reduce your specific symptoms.
iStock
Condition: Fibromyalgia
This chronic condition causes body-wide pain and tenderness in about 2% of the population, most often middle-aged women. The soreness is similar to rheumatoid arthritis, with one big difference—the affected joints don’t swell, they just ache. Other symptoms include fatigue, bloating, headaches, and brain fog.
The fix: In addition to medications, research suggests that acupuncture may slightly improve pain and stiffness in people with fibromyalgia.
iStock
Condition: Tendonitis
Tendons—which attach the muscle to the bone—can become inflamed due to overuse. Blame workouts that require the same action over and over (tennis, cycling, running) or jobs with repetitive movements.
The fix: At the first sign of pain, rest the joint, ice it for 10-15 minutes at a time to quell inflammation, and pop an NSAID. In severe cases, cortisone injections can help, but long term they can cause additional muscle trauma, so consider them a quick fix.
iStock
Condition: Lyme
Usually caused by exposure black-legged or deer ticks, Lyme disease frequently results in joint pain. Achiness sets in—most often in your knees—a few weeks after the bite, as the infection spreads throughout the body. It may become more severe years later.
The fix: Early-stage Lyme disease is usually resolved after two to three weeks of antibiotics. But once inflammation causes the joints to swell, a longer, month-long course is often needed. Severe cases may require IV antibiotics or other anti-inflammatory medication.
iStock
Condition: Hypothyroidism
Got a sluggish thyroid? One study found that up to 80% of patients with hypothyroidism have myopathy, a weakening of the muscles that can cause pain and tenderness in the joints, especially in the shoulders and hips.
The fix: If you’re diagnosed with hypothyroidism, your endocrinologist will likely prescribe levothyroxine, a synthetic hormone to replace the one your thyroid isn’t producing. It should help ease joint pain and other symptoms, including fatigue, depression, and sensitivity to cold.
iStock
Condition: Depression
Surprised? Aches and pains go hand-in-hand with low moods, and joint discomfort is often the first physical symptoms to appear. Inflammation may play a role: One study found that C-reactive protein levels (an inflammatory marker) were 31% higher in people with depression.
The fix: Antidepressants can improve both mental and physical conditions, but also add exercise, which may help with pain and mood.