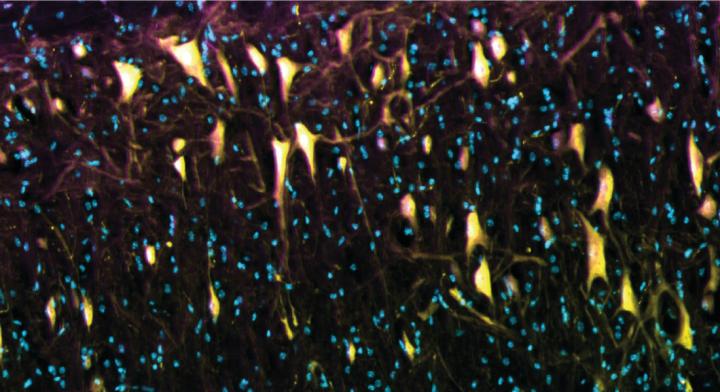 The image shows the compound Tat-P4-(C5)2 after an injection into the spinal cord. The compound (purple) penetrates the nerve cells of the spinal cord (yellow), but not the surrounding cells (the cell nuclei are blue). CREDIT University of Copenhagen

Researchers from the University of Copenhagen have developed a new way to treat chronic pain which has been tested in mice. With a compound designed and developed by the researchers themselves, they can achieve complete pain relief.

Between seven and ten percent of the world’s population suffers from chronic pain originating from nerves that have been damaged. A disease that can be severely debilitating. Now, researchers from the University of Copenhagen have found a new way to treat the pain.

The treatment has been tested in mice, and the new results have been published in the scientific journal EMBO Molecular Medicine. For more than a decade, the researchers have been working to design, develop and test a drug that shall provide complete pain relief.

“We have developed a new way to treat chronic pain. It is a targeted treatment. That is, it does not affect the general neuronal signalling, but only affects the nerve changes that are caused by the disease,” says co-author Kenneth Lindegaard Madsen, Associate Professor at the Department of Neuroscience, University of Copenhagen.

“We have been working on this for more than ten years. We have taken the process all the way from understanding the biology, inventing and designing the compound to describing how it works in animals, affects their behaviour and removes the pain,” says Kenneth Lindegaard Madsen.

Chronic pain can occur, among other things, after surgery, in people with diabetes, after a blood clot and after an amputation in the form of phantom pain.

Clinical trials as the next step

The compound developed by the researchers is a so-called peptide named Tat-P4-(C5)2. The peptide is targeted and only affects the nerve changes that pose a problem and cause the pain.

In a previous study, the researchers have shown in an animal model that use of the peptide can also reduce addiction. Therefore, the researchers hope that the compound may potentially help pain patients who have become addicted to, for example, opioid pain relievers in particular.

“The compound works very efficiently, and we do not see any side effects. We can administer this peptide and obtain complete pain relief in the mouse model we have used, without the lethargic effect that characterises existing pain-relieving drugs,” says Kenneth Lindegaard Madsen, adding:

“Now, our next step is to work towards testing the treatment on people. The goal, for us, is to develop a drug, therefore the plan is to establish a biotech company as soon as possible so we can focus on this.”

The researchers are now working towards clinical trials in collaboration with, among others, pain researcher Nanna Brix Finnerup, Professor at Aarhus University.