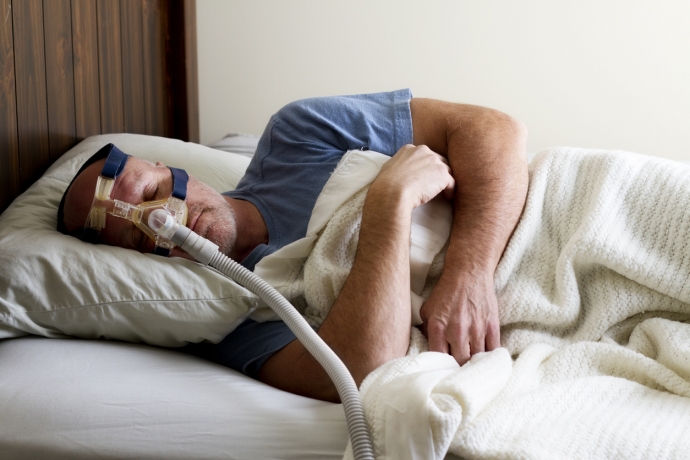 Obstructive sleep apnea (OSA) and central sleep apnea (CSA) are sleep-related breathing disorders, in which the patient has impaired ventilation during sleep and sleep disruption. OSA is more common and often presents with daytime sleepiness and impaired daily function or behavioral problems in children. CSA presents with similar symptoms and can be a primary condition, in combination with OSA, or secondary to another medical condition or medications.

OSA occurs when patients with a collapsible airway fall asleep, causing their neuromuscular output to decline. This reduction in output causes the airway to collapse completely or almost completely. When ventilatory reflexes are activated due to a lack of breathing, the patient arouses, neuromuscular activity returns, and the airway reopens. The most common place for airway collapse is the soft palate, but it may also occur at the tongue base, pharyngeal walls, or epiglottis.

The condition is most severe during rapid eye movement (REM) sleep, when neuromuscular output is particularly low, and when lying flat. The prevalence of OSA varies based on age; in middle-aged adults it is 2% to 15%, while among elderly patients it increases to greater than 20%.

CSA occurs most often in patients with increased sensitivity to partial pressure of carbon dioxide (pCO2). This sensitivity causes an unstable breathing pattern that alternates between hyperventilation and apnea. CSA is markedly different from OSA in that it is characterized by cessations in airflow without the usual corresponding respiratory effort that is seen in OSA.

Major risk factors for OSA include obesity and male gender, with 40% to 60% of cases being attributable to excess weight. Other risk factors are: thicker neck circumference, smoking, nasal congestion, and older age (greater than 60 years old). Risk factors for CSA similarly include male gender and older age (greater than 65 years), but also include a history of stroke or brain tumor, congestive heart failure/heart disorders, opioid medications, and hypoxia.

Opioids act on G protein-coupled receptors which mediate pain, respiratory control, stress responses, appetite, and thermoregulation. Opioids impair breathing via action on the mu (µ) opioid receptors by central depression of respiratory rate and amplitude, reduced arousability, as well as upper airway dysfunction.Opioids’ impact on breathing in combination with OSA can lead to respiratory failure and even death; in fact, it has been estimated that 70% to 85% of patients taking opioids have sleep-disordered breathing (SDB).  In addition, two hallmark components of OSA, intermittent hypoxia and sleep fragmentation, enhance pain.

There have been several risk factors identified when it comes to opioids and SDB. In fact, the 2017 Veterans Affairs (VA)/Department of Defense (DoD) Clinical Practice Guideline for Opioid Therapy for Chronic Pain identified SDB as a “significant risk factor” for increasing the potential for adverse outcomes related to opioid therapy. Methadone has a higher risk of causing sleep apnea than other opioids, both when used for pain and for methadone maintenance therapy (MMT).Other risk factors include high doses of opioids (particularly those greater than 200 mg MED). One study found that each 100 mg MED increased the rate of apneas by 14.4% and of central apneas by 29.2% when adjusted for factors of weight, age, and sex. Concomitant use of benzodiazepines or hypnotics with opioids is an additional risk factor.

Patients who answer “yes” to five or more of the eight questions listed above may be considered at a high risk for OSA, and evaluation with a polysomnogram (sleep study) should be considered. Others may be considered low risk, but extra precautions may still be appropriate.

If sleep apnea is confirmed or suspected and the patient is being prescribed chronic opioid therapy, there are several risk-mitigation strategies that may be considered: opioid dose reduction (particularly if current MED > 200 mg), trial of non-opioid therapies, avoiding concomitant use of benzodiazepines or hypnotics and monitoring for non-prescribed use of these agents, supplying patients with at-home naloxone kits, cautioning against alcohol use, and appropriate treatment and compliance with treatment for SDB.

It remains to be seen if there is an advantage to using immediate-release (IR) opioids versus extended-release/long-acting (ER/LA) opioids in those with sleep apnea. One study found a potential benefit with dosing a once-daily ER/LA opioid in the morning rather than in the evening in those where SDB was a concern.12

Interestingly, continuous positive airway pressure (CPAP) therapy may worsen CSA in some patients; there have only been a few studies discussing the use of CPAP machines in patients on opioid therapy with OSA. Patients on opioids have decreased inspiratory effort during obstructive events resulting in longer than expected pauses in breathing. Unfortunately, nocturnal awakenings and apnea awakenings persisted in these patients despite adequate CPAP or bilateral positive-pressure (BiPAP) treatment.

However, BiPAP with a back-up rate was found to be the most effective treatment,14 possibly because opioid-related apneas are a type of CSA.15 BiPAP with and without supplemental oxygen has been found to eliminate central apneas in at least two studies. CPAP also was not found to reduce pain intensity or consumption of opioids in a study of veterans with chronic pain.

In the authors’ view, compliance with prescribed CPAP or BiPAP machine therapy may (and likely should) be assessed periodically throughout opioid therapy (in addition to opioid monitoring practices) to ensure that the patient is adherent to the treatment plan and overall goals. If compliance with CPAP or BiPAP cannot be confirmed, then continuation of opioid therapy should be re-evaluated. Other practice considerations, not guideline-based, include capping the daily opioid dose at a relatively low MED level and/or prescribing IR opioid formulations only. It should be noted that the use of a CPAP or BiPAP machine alone may not be sufficient in patients diagnosed with SDB as these approaches do not completely prevent or reverse nocturnal awakenings and apneic episodes, which fails to eliminate risk for potential opioid-related adverse effects.