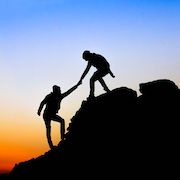 Over the past few decades, many studies have examined the paradox of altruistic behaviors, which benefit others at a person’s own expense. Considering the often significant cost of these prosocial behaviors, researchers have wondered whether acting in an altruistic manner might come with as-yet unidentified benefits that would explain the self-sacrifice.

“The results show convergent validity across several different situations,” said Tor Wager, Dartmouth College, Hanover, US. “The study has broad implications for our understanding of how basic motivational processes work in influencing our perceptions of pain,” according to Wager, who has investigated how prosocial behaviors can affect pain perception but was not involved in the current work.

The study appeared January 14, 2020, in Proceedings of the National Academy of Sciences (PNAS).

Xie said she was motivated to study altruism following the 2008 Wenchuan earthquake in China.

“Based on our observations, altruistic behaviors between the victims and the volunteers surged in time of crisis,” she said. “We wondered whether acting altruistically might help people better cope with crises and how performing such altruistic behaviors might affect the performers themselves. For example, our previous work suggested that altruistic behaviors promote warm feelings and lessen feelings of physical burden,” according to Xie (Hu et al., 2016; Li and Xie, 2017).”

Yilu Wang, co-first author of the study along with Jianqiao Ge, Peking University, said there is a large literature suggesting that altruistic behaviors have positive effects on stress-related physiological responses to crises. They hypothesized that such effects could include changes in pain perception.

To test the idea, the group began with two pilot studies. The first looked at pain perception after venipuncture (a blood draw), comparing individuals who donated blood for earthquake victims to those who needed to provide blood for routine medical tests.

In a second pilot study, the researchers gave study participants the opportunity to voluntarily revise, without pay, a counseling handbook for children of migrant workers, while a control group was told the revision activity was mandatory, and a non-altruistic group declined to do the activity. After performing the revision task, the participants were subjected to the cold pressor test, in which they submerged their non-dominant arm in cold water (5°C) and rated their pain on a visual analogue scale every 15 seconds for a period of no more than three minutes.

Not only did the altruistic group report less pain than the control and non-altruistic groups, but they were able to leave their arm submerged in the cold water for a longer period than both of the other groups.

One limitation of the two pilot studies was that study participants were not randomized to performing altruistic or non-altruistic behaviors, so selection bias could have been at play; altruists and non-altruists might differ in important ways that could make study results difficult to interpret.

“We needed to do an experimental study, with random selection, to see if it was the acts themselves that facilitated those feelings,” said Xie.

To do so, the researchers conducted three different experiments, randomly assigning participants to an altruism group or a control group in experiments one and three, and using a within-subjects design in experiment two.

The first experiment used the tourniquet pain test, where a standard blood pressure cuff was inflated to place painful pressure on the upper arm for three minutes, with study participants rating their pain intensity every 15 seconds. This provided the researchers with a baseline measure of an individual’s pain levels. Next, subjects in the altruism group were told their participation in filling out a survey on consumer decision-making would earn a donation for earthquake victims once complete. Those in the control group were paid the same amount but as a personal reward. After completing the survey, all participants went through the tourniquet test a second time. Those in the altruistic group reported less pain from the tourniquet than the control group did, even as both groups reported more pain throughout the entire tourniquet test process. In short, acting in an altruistic fashion was analgesic.

For the second experiment (within-subjects design), to understand the neural mechanisms underlying the changes in pain perception, the researchers turned to functional magnetic resonance imaging (fMRI). During a donation stage, participants were asked to decide whether to donate money, at their own expense, to help orphans (altruistic condition) or to complete a shape discrimination task where they had to decide if two lines of figures had the same shape (control condition). Participants also indicated how meaningful their choice was to helping the orphans. The subjects then rated the severity of their pain in response to electric shocks (the pain stage of the experiment).

In most of the trials that the researchers did in the altruistic condition, study subjects decided to donate money, and they rated their decisions as more helpful to the orphans, compared to the control condition. These individuals also reported less pain in response to the shocks, as revealed by pain scores calculated by subtracting pain ratings of low-intensity shocks from ratings of high-intensity shocks.

Further, there were significant differences in brain activity in response to the high- versus low-intensity shocks during the pain stage. This included decreased activity in the bilateral insular cortex, dorsal anterior cingulate cortex, and right primary somatosensory cortex, all pain-related regions, in the altruistic condition; these changes were correlated with feelings of helpfulness reported in the donation stage. There was also an increase in activity in regions including the ventral medial prefrontal cortex (VMPFC) when subjects made altruistic decisions, compared to when they made shape judgments.

In the final experiment, the researchers recruited cancer patients living with chronic pain to participate in a seven-day program. During the program, participants were randomly assigned to an altruism group, where they were asked to do personal activities including cleaning the public area for their wardmates, or to a control group, where they were asked to clean just for themselves. There was also a group activity where the altruistic group came up with nutritional plans for their wardmates and shared those plans in a group meeting, while the control group attended a workshop given by a nurse on healthy nutritional diets. Baseline pain levels were assessed on day one, using a faces pain scale.

All the participants showed a decrease in pain, but, consistent with the earlier findings, this decrease was most pronounced in the altruistic group. In fact, the pain-relieving effect declined over 60% when subjects did the activities for themselves.

Wager said that, taken together, the studies provide evidence that altruism can reduce the perception and sensation of physical pain in both acute and chronic pain conditions. He said this suggests that a person’s own narrative about the pain they are experiencing influences pain perception.

“It would seem what you tell yourself about yourself and what you may be suffering matters,” he said. “Suffering in service of something that helps people can make pain more bearable.”

Xie hopes to follow up on the current study with deeper investigations into the neural mechanisms underlying the pain-relieving effects of altruism and, more broadly, with studies of how altruistic behavior may influence an individual’s sensations and perceptions using further brain imaging. In the meantime, she hopes that people understand that altruism could play a role in pain management.

“Altruism is not just other-benefitting,” she said. “It benefits the performers as well. We hope our study may encourage people to engage in altruistic behaviors more often. In addition, this low-cost, side effect-free approach could help supplement current therapies to treat chronic pain.”