Is Kratom a Viable Alternative to Opioids? 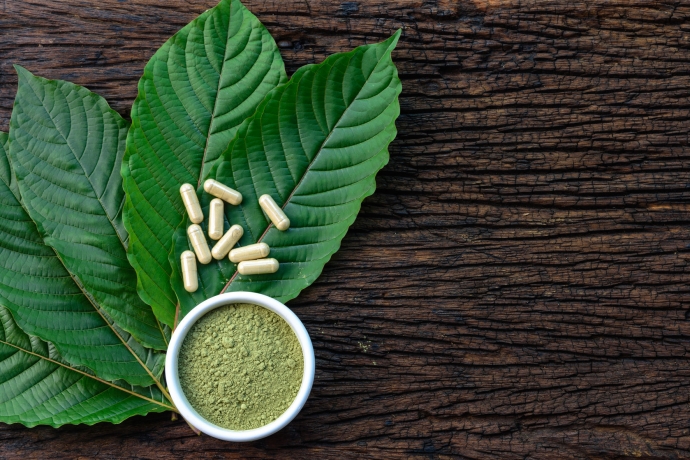 Current estimates suggest that more than 5 million people in the United States are using a substance called kratom to treat a wide range of ailments, including chronic pain, opioid use disorder (OUD, formerly termed opioid addiction), mood disorders, and insomnia.

Sometimes called Thom, Biak, Kakuam,or Thang,kratom is a plant leaf extract historically used in Southeast Asia as a stimulant at low doses and an analgesic at higher doses. In recent years, it has entered the US (often illegally) via online purchasing and at local head shops.

However, its use has garnered considerable attention, and kratom is now listed as a “drug of concern” by the US Drug Enforcement Agency (DEA). Although kratom use is legal at the federal level, multiple states have banned kratom, including Alabama, Arkansas, Indiana, Wisconsin, Rhode Island, and Vermont. Furthermore, the US Food and Drug Administration (FDA) has placed several regulations on kratom, including bans on its importation (see details below). (Check for individual state bans and updates at https://kraoma.com/kratom-legality-united-states/.)

But some individuals who use kratom give it glowing testimonial, reporting several benefits to the use of this herb in managing their pain and/or OUD. Below, we give the lowdown on this widely used but controversial drug.

Derived from an evergreen tree, Mitragyna speciosa, kratom is a mind-altering substance primarily used in Southeast Asia for its various properties, as noted above. The FDA has ascertained that the substance’s main ingredients are classifiable as opioids. Oliver Grundmann, PhD, FCP, a clinical associate professor from the Colleges of Pharmacy and Nursing at University of Florida, shared his expertise with PPM about what that means.

“It is under discussion in the scientist world. Yes, these compounds bind to the same opioid receptors in the brain and throughout the body but the effects that happen once they bind to the opioid receptors are not exactly the same as with morphine or oxycodone. We don’t necessarily see the same respiratory depression [which may occur with chronic opioid therapy]. We don’t see the same degree of constipation. However, we do see an analgesic, or pain-reducing, effect.”

Dr. Grundmann notes that individuals have been known to use kratom for a variety of reasons, including self-treatment of pain, mood disorders, and withdrawal symptoms from a variety of prescription and non-prescription drugs.

Kratom is distributed in many forms, including leaves that can be chewed or prepared as tea, powder that is dissolved into drinks, capsules, liquids, resins, and patches. Much like cannabis, there are several strains of the substance available with varying effects and potencies, based upon its exact composition. Currently, no regulations are in place to control for kratom’s components or purity.

Dr. Grundmann shares that patients have reported positive results from the use of kratom in surveys that he has conducted, including for the self-treatment of both chronic and acute pain. “There is also a tendency for users to use kratom for self-treatment of mood disorders, for example, for anxiety or depressive disorders or PTSD [ie, post-traumatic stress disorder]. A minority who are users or consumers use it to mitigate withdrawal symptoms from a variety of prescription drugs or even illicit drugs,” he says.

But he also expresses a need for reservation, pointing out that, “We do not have good clinical trial information. That should give us pause and caution in making solid recommendations about the use of kratom.”

As with any substance, comes the risk of side effects, and with kratom use, effects may include agitation, tachycardia, nausea, drowsiness, and hypertension. Withdrawal symptoms from the substance may include muscle spasms, insomnia, watery eyes, runny nose, restlessness, and depression. Kratom use may increase the risk of addiction, abuse, and dependence, but it is unclear as to whether it is as dangerous as opioids.

In a February 2018 statement, then FDA Commissioner Scott Gottlieb, MD, shared the agency’s view: “The extensive scientific data we’ve evaluated about kratom provides conclusive evidence that compounds contained in kratom are opioids and are expected to have similar addictive effects as well as risks of abuse, overdose and, in some cases, death”.

Given that kratom has overlapping properties with opioids, the FDA, DEA, and other authorities have already issued multiple alerts on the substance:

Based on growing research showing the risks involved with using kratom, the agency continues to urge consumers not to use any kratom-containing products and to dispose of any in their possession.

Dr. Grundmann, however, does not necessarily think kratom should be placed into a Schedule I category. He weighed in, noting that, “Within the regulatory framework that the FDA has oversight, it can be assured that we have unadulterated, non-contaminated kratom products on the market that are well-labeled, that adhere to good manufacturing practices, and that consumers as well as patients with healthcare providers can rely on. These are essential points that will help us ensure that accessibility can be possible and those that are currently using kratom are needing that access.”

Leaders around the world at the forefront of kratom research joined together for a symposium in 2019 in Orlando, Florida, to put their heads together about what needs to be done to improve understanding of kratom, of which Dr. Grundmann was an attendee.

“There is some research needed to establish further what is considered safe for kratom,” he reported. “On the other side of the spectrum, we are looking at what we can do with this new mechanism of action, that is, how the substance mitragynine in kratom acts on opioid receptors.”

He acknowledged hope of a better treatment option for chronic pain, but there is certainly a lot of work to be done. “That would require the development of a single substance,” he explained. “That substance would go through clinical trials [which] would likely take 8 to 10 years of development with the pharmaceutical industry process and investments of $800 million to $1 billion. It cannot be done overnight.”

The bottom line: consumers should steer clear of kratom until more research is done and US approvals are given.

Read about other plants that may help to manage chronic pain.