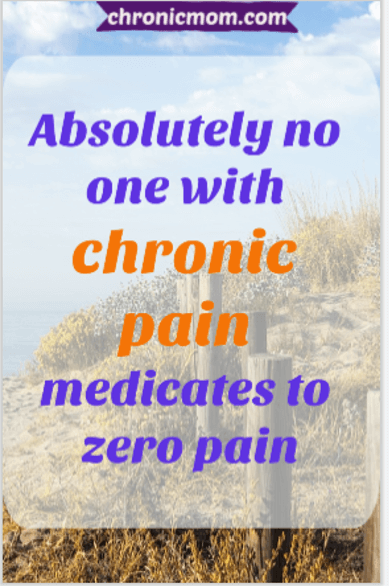 A frequent comment I see from doctors and random internet commentators (who often have the same amount of knowledge) is that people with chronic pain need to stop believing that they deserve to be in zero pain. Basically their view is that the opioid epidemic was caused by pain patients demanding that they never be in pain ever, and so they medicated themselves into painless zombies.

This is absolutely ridiculous, and every person who has experienced chronic pain knows it.

No one medicates to zero pain.

The idea of taking pain medication for chronic pain is to be able to live some sort of life, despite the neverending pain. If there’s a doctor out there willing to give their legitimate pain patient enough medication so they never ever hurt, I’d love to get their information. The majority of the doctors that participated in fueling the “opioid crisis” weren’t helping legitimate pain patients, they were fueling addicts because it was profitable to do so.

People with chronic pain have always been expected to accept their pain and to a certain amount, get over it. Doctors have been telling women that their pain isn’t important since the beginning of time, and the opioid epidemic didn’t change that.

Back in the day when I could get opioids for my pain, I used them to help me get through the more arduous tasks I had to do in order to be a parent and a member of society. I only had one pill per day so I had to use them very carefully.  I generally saved mine for nighttime in order to  lower my pain levels enough to sleep. Sometimes I took pain medication after a long afternoon on my feet helping at my children’s school. In both of these cases the medication did not make my pain go away, it only made it bearable.  It stopped me from being so consumed with misery that I couldn’t live any sort of life.

Nowadays I no longer receive treatment for pain. This basically means I don’t sleep, and because I don’t sleep I can’t function very well. I’ve had to drop many of my activities that support my children. I can no longer actively play with them, I have to play from a chair or the couch. I can’t take them hiking anymore, even though that’s one of my favorite things to do. I can’t take them on the kind of exploratory vacations I used to, because the walking just causes to much pain. I can’t concentrate on anything for more than a few minutes, because the pain takes over my whole brain. But at least I have the comfort of knowingI’m not addicted.

I’ll be the first to admit, I don’t know the answer to this question. As someone whose been in constant, agonizing, 24/7  pain for 9 years it seems obvious that the pain never actually goes away. For whatever reason most people and most doctors think that pain patients are demanding no pain, and that is what makes them addicts. I do have a few theories on why this is

Most likely it’s a combination of all these things. Unfortunately, none of these instances are easy to fix. The media and the government insist that anyone who takes pain medication ever is an addict and they refuse to acknowledge dependence being different. The opioid hysteria has people freaking out about loved ones dying of addiction, and when you’re freaking out it’s hard to use logic and easy to blame doctors or people in pain instead of the actual addict. To be clear, I do not want to demonize addicts, and I’m thrilled that addiction is now being treated  seriously. It’s just ironic that addicts are starting to get help, and people in pain who have no relationship to addiction are considered the real menace to society.

Perhaps the real issue is that people in pain present a problem that no one knows how to solve, and so it’s easier just to blame the victim.