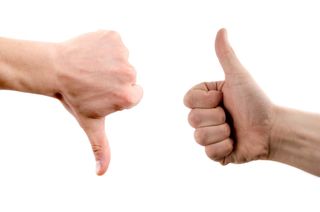 I’m writing this piece as a challenge to myself. If I had my choice, I’d wake up tomorrow with my health restored. But here I am, into my 19th year of chronic illness (which includes ), so I decided to see if I could come up with 10 things I “like” about being chronically ill in order to counter all those “don't likes.”

Don’t-Like. Being housebound most of the time. I can spend days not being able to leave my apartment except to take the dog out. It can feel oppressive at times.

Like. Being housebound means that day is my own. Being on my own so much allows me to craft most days as I wish, so long as I stay at home. Yes, it can be oppressive at times but, at other times, I have the opposite feeling. This ability to control my own day gives me a sense of freedom I never felt before becoming chronically it. It’s odd to say that being housebound can make me feel free, but it can…and I like that.

Don’t-Like. All those doctor appointments. We're all too familiar with this Don't-Like.

Don’t-Like. Having lost so many friends. Many of my pre-illness friends have drifted away, either because I’m too unreliable as a companion (I may have to cancel at the last minute), or because they have a strong aversion to pain and illness (it scares some people, even though they’re a natural part of the life cycle.)

Like. I treasure the few close friends I have. I’m so much closer to them. They understand my limitations. They’re gracious if I have to cancel at the last minute. Our sharing is deep and intimate. I’m to have them as friends.

Don’t-Like. I don’t have a reason to get dressed up anymore. It used to be fun at times. It made me feel pretty.

Like. I don’t have a reason to get dressed up anymore!! It was a pleasure to get rid of my pantyhose and my heels. I’m sure we each have our own list of things we’ve been happy to discard.

Don’t-Like. Waking up feeling as if I never went to sleep. This is called non-restorative sleep. I remember how wonderful it felt to wake up feeling refreshed in the morning. Pain and illness keep that from happening now.

Like. At least (almost always) non-restorative sleep doesn’t interfere with my commitments because I have so few. I may feel lousy but at least I’ll be at home feeling lousy!

Don’t-Like. How hard it is to take care of basic things. Some days are more challenging than others on this score. My hamper can fill up with clothes because I don’t have the stamina to run the washer and dryer. My sink can fill up with dishes because it’s too hard to stand in front of it long enough to wash them.

Like. I have fewer things to take care of! Yes, my hamper may fill up with clothes, but that hamper is half the size it used to be since I have fewer clothes. In fact, I have less of almost everything. It can make me feel “lighter” about life, and I like that.

Don’t-Like. Being unreliably socially. It was always important to me to keep my commitments. If I said I’d meet someone for lunch at 12:00, I’d be there at 11:55. Now, the problem is not being late, it’s being able to come at all. I can wake up in the morning feeling so sick that I have to cancel any social plans I’ve made for the day.

Like. Not having to commit to social occasions that I’d rather not attend. I wasn’t sure I should include this because, not only does it sound rude, but I think it may be a little secret that all of us who struggle with our health share: we have the perfect excuse to bow out of things we don’t want to do. I rarely use my chronic illness as an excuse because I generally feel obligated to accept an invitation, if the occasion is within my limitations. But, there you have it: a confession.

Don’t-Like. My inability to take long walks with my dog. Before I got sick, walking was my principal form of exercise. I liked to take whatever dog we had at the time (I always have a dog) on hour-long walks, always heading for nearby parks and wild areas.

Like. My dogs have become close friends. I never paid as much to my dogs as I have since becoming chronically ill. Yes, I walked them, but it was never a “personal” relationship. Now it is. I think of my current dog, Scout, as a roommate.

Don’t-Like. Being so limited in what I can do. At times, this has been a big source of frustration.

Like. I’ve become more creative. I’ve been forced to find things to do that are fun or fulfilling but still within my limitations, and I think this has been good for me. Recently, after filling some embroidery hoops with flowers embroidered on various colors of material, I made a mobile out of the hoops. I did almost all of this from my bed. Was I not chronically ill, this idea would never have occurred to me.

And the Number One thing I "Don't-Like BUT Like" about being chronically ill:

Don’t-Like. The lack of in-person interactions. Being in the company of others in person, as opposed to connecting with others online (via email, texts, websites), has an intimate quality to it that I miss.

Like. The online life that so many of us with chronic illness share has connected me with people all over the world. I feel like a world citizen. Because of my books and online writing, I get emails from everywhere on the globe. One of my favorites was a recent one from a pharmacist in Iraq who asked me if there was a way she could get one of my books. Iraq!