Stand On Your Bottom, What?! The Truth About Sitting. 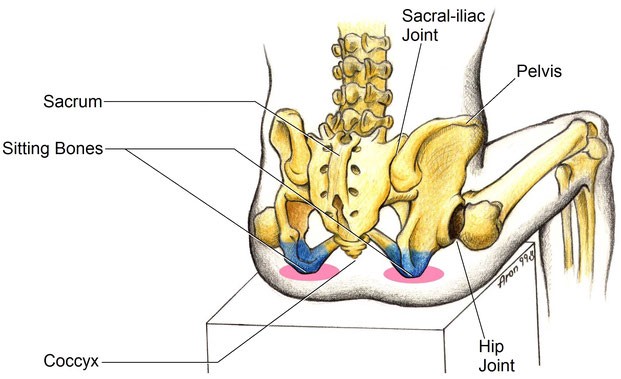 This article is part of a series on the Alexander Technique originally published in theHuffington Post.

I don’t like to teach the Alexander Technique from an overly anatomical view, too much detail to think about in day to day living. I’m much more interested in the way we think and react, rather than what we think about, but this is something really useful for you to consider when it comes to sitting.

Look at how the bottom of the spine joins with the pelvis. What changes to that relationship when the weight bearing changes from going through your hips, and ultimately to the ground via your feet, to going through your sit bones into your chair? Not much! You’ll notice that both the hip joints and the sit bones are below the sacral-iliac joint, that is, where the base of the spine, the sacrum, fuses with the pelvis.

As far as your spine is concerned sitting and standing is pretty much the same thing, so why do you sit so differently to the way you stand? One reason is that you may simply not be aware that your sit bones are there to be sat on, or “stood” on as I like to say. It’s common to see people using their coccyx, or tail-bone, to be the point of contact with the chair which causes the pelvis to tip backwards and rounding the lower back, hence the lower back pain many eventually suffer from sitting in this way.

The surface that you sit on is also a huge contributing factor in how you sit, but as long as it is flat and firm it will do. My motto is “if you can stand on it, you can sit on it”. Ignoring that most office chairs swivel, it is the support that the surface provides I’m interested in here, so I don’t want you to have an accident at work now!

This is why sofas are so hard to sit on well. Try standing on your sofa and you’ll soon find how hard it is to feel balanced. With your sit bones as your “feet” it is no wonder that sitting on a sofa is hard to do well, and you give up by collapsing into it. I’m going to leave out discussing ergonomic chairs for now as that will be the topic of my next blog.

Another reason is that the act of sitting is incorrectly associated with relaxing. Sure, it’s more relaxing for the legs and hips, but as far as your torso/spine is concerned, sitting is as equally dynamic as standing. Even the word “relax” seems to be misunderstood, I’m often heard saying during lessons “that’s not relaxing, that’s collapsing!” It is perfectly possible to relax into a balanced posture, whether sitting or standing, so that our bones support our weight. Yes, the postural muscles will still be working, but think of them as having tone rather than tension. It is when poise and balance is lost in collapse that movement muscles as well as the deeper postural muscles become over-worked trying to support the collapse that tension arises; that’s not relaxing at all!

If your office chair tilts backwards allowing you to come to rest against the back support this is still likely to be another form of collapse. You could think of this as elegant repose in order to do it well, but if you are honest with yourself you’ll have allowed the muscle tone of your torso to go limp. And what’s wrong with that if your back is being supported? Well, your arms are an extension of your back!

Don’t make the mistake of thinking your arms are simply attached to your shoulders, that may be true as far as the skeleton is concerned, but your arm muscles overlap and are embedded deep into your torso, all the way down your back to the top of your pelvis. So if you lose the integrity and tone of your back you will lose the support from the roots of your arms, and without that the use of your hands is compromised potentially contributing to RSI and Carpal Tunnel Syndrome.

As with many aspects of the Alexander Technique, there is also the way you think to consider. Like the association of relaxing being inert, the very phrase, sitting “down”, encourages the thought that that is where you are wanting to go in your entirety. What you don’t want to do is remedy that by doing the opposite, by “sitting up straight” as we were all no doubt told to do as children, as that encourages effort, and effort will lead to tension. That’s why it is so tiring to “sit up straight” as it is commonly understood. Instead, just remain lightly standing, but on your bottom, being bright, alert, active and engaged. If you start to feel tired it’s fine to use the back rest (still thinking of elegant repose!) and take time out for a few minutes. The trick to using a chair’s back rest is to hinge backwards from your hip joints whilst maintaining the contact with your sit bones, and not rolling back on your coccyx (tail bone). Better still though, get up and walk around and get your blood pumping again.

P.S. Here’s a thought experiment, if sitting is standing on your sit bones, how does it change your experience to consider standing as sitting on your stand bones?