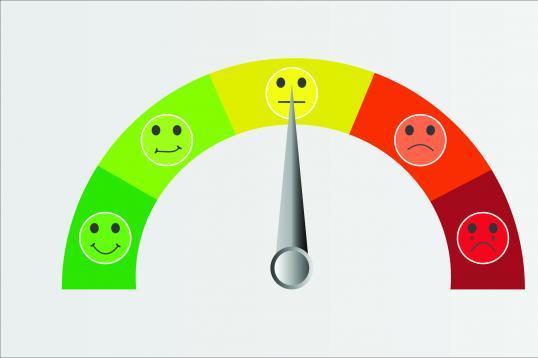 Rather than utilizing smiley and sad faces to measure pain, researchers have devleoped an accurate way by checking brain activity via an EEG. Image courtesy of Brown University

The precise measurement, utilizing electroencephalography, or EEG, should help in the development of new potential pain medication, according to researchers who presented their findings Monday at the annual convention of the Society for Neuroscience in San Diego and published them Tuesday in the journal Scientific Reports.

"In spite of our increased knowledge of the biology, physiology and neural circuits of pain, little success has been achieved recently in developing new analgesic agents," the authors wrote.

And that's because of inaccurate ways to measure pain.

Patients usually are asked to determine the level of pain usuing row of numbered faces, with expressions from smiling to grimacing.

"Sadly, this scale of smiley faces, called the visual analogue scale, is the gold-standard pain-assessment tool," Dr. Carl Saab, an associate professor of neuroscience and neurosurgery at Brown University and Rhode Island Hospital, said in a press release. "Our goal is to associate specific brain activity with various scores on the numerical scale to make pain assessment more objective."

He said the goal is to help patients with chronic pain and their physicians "get into agreement about pain level so it is better managed and diagnosed, which may reduce the over-prescription of opioids."

The researchers developed an EEG-based test to objectively measure pain. The EEG measures brain activity using electrodes placed on the scalp in the form of oscillations or "waves" of a certain frequency.

In tests of 67 rats, researchers performed a computational analysis of waves from the "theta band."

The current method to measure pain and consequently the effectiveness of potential pain medications is to poke the animal's paw and see how quickly it moves its paw away.

"When I was a graduate student, I hated this test because it had nothing to do with clinical pain," said Saab, who is affiliated with Brown's Carney Institute for Brain Science. "Nobody pokes a patient with back pain. I'm just so happy that I beat this test, now we're working with something better."

The researchers examined three pain medications and compared their effectiveness in an animal model of sciatica. Used were the traditional behavior test, the EEG test and an analysis to determine blood concentration of the medications.

Lyrica, the brand name of the pain medication pregabalin, was first test. The second one was a promising pain medication in phase two clinical trials and the third was a medication with inconclusive effectiveness in earlier studies.

But in a few experiments, including dose below the effective level of the first medication, the EEG test provided more accurate results. In indicating pain relief at a dose lower than the effective dose, the behavior test gave a false positive.

"The ability to detect false positive or false negative outcomes is crucial to the drug development process," the authors wrote.

Saab is now working to translate his brain-wave findings to patients by calibrating the EGG signatures of pain with the traditional smiley-face-based pain assessment tool.

Saab said his method can be especially helpful for patients with difficulty communicating, including young children. And he noted there is considerable interest in the tool for veterinary medicine.