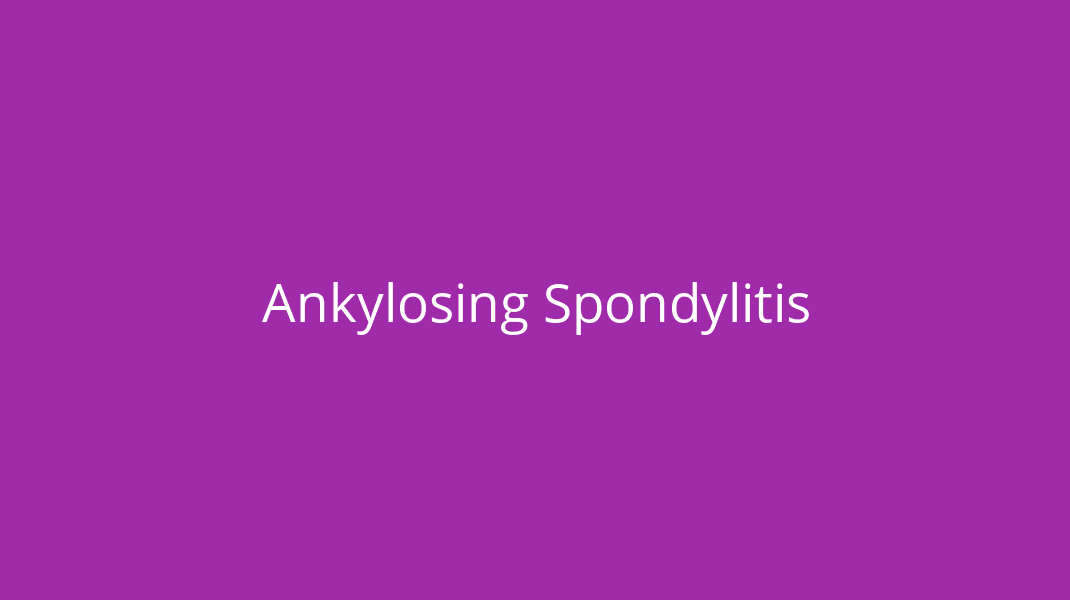 Pain and Tenderness
SHARE
Ankylosing spondylitis (AS) is a type of chronic inflammatory arthritis that causes joint inflammation. Primarily, joints in the spine are affected in people with AS, but other joints in the body may also become inflamed. Most often, AS symptoms begin in late adolescence or early adulthood, although in some cases they may begin in childhood or later adulthood. Each individual with AS can have slightly different symptoms, as there is much variation in the disease.1,2
The pain and stiffness of AS often begins in the sacroiliac (SI) joints, which are located where the hip bones (pelvic bones) meet the base of the spine. AS may progress up the spine, causing inflammation between the vertebrae. Some people also have pain and inflammation in other joints, like the shoulders, ribs, hands, or feet. The pain experienced by people with AS often begins gradually, and it varies between different people with AS from mild to excruciating. People with AS may also experience widespread or referred pain.1,2
Widespread pain
Widespread pain is a general term that indicates a person is having pain in several areas of the body at the same time. People with AS may have multiple joints affected, causing pain and stiffness in many areas of the body. One study found that people with AS were more likely to have widespread pain than people with other types of spondyloarthritis (SpA), and that widespread pain significantly impairs a person’s quality of life and ability to function. Widespread pain is also associated with higher levels of anxiety and depression.3
Besides the pain of AS, people with AS are also at a greater risk of developing fibromyalgia, a neurological condition that is characterized by widespread pain.4,5 Fibromyalgia causes widespread, chronic pain in the muscles, joints, and/or skin. The pain is often described as a dull ache and points may be tender to the touch. Fibromyalgia also causes significant fatigue , sleep problems, and cognitive difficulties (challenges with concentration or thinking clearly, sometimes called “fibro fog”).6,7
In addition to the joint pain caused by AS and the neurological pain caused by fibromyalgia, widespread pain can be a symptom caused by other conditions, including endocrine disorders, gastrointestinal disorders, and other neurological diseases.8
Referred pain
Referred pain is pain that is felt in another part of the body rather than the actual source or cause of the pain. Referred pain sensations often occur in regional areas of the body, as multiple nerves that serve different organs or structures enter a similar area in the spinal cord.9
People with AS may experience referred pain, such as when the hip joint is affected by AS and the pain is felt in the groin, knee, or the front of the thigh.10 Low back pain caused by AS may also cause referred pain, with the person perceiving the pain in the thigh.11
How is pain treated?
Treatment of pain and other symptoms of AS usually involves a combination of medications , physical therapy , and exercise . Medications for AS include:12,13
Non-steroidal anti-inflammatory drugs (NSAIDs), which can help relieve pain and inflammation
Biologic medications , which may help slow or stop the progression of the disease by blocking key processes or compounds involved in the inflammatory response
Corticosteroids , which may be used for short-term relief of inflammation
Slow-acting anti-rheumatic drugs (SAARDs) , which may help relieve pain and inflammation, especially in those who cannot take biologic medications
Many people with AS also find complementary methods to be helpful in relieving symptoms, such as using heat and cold or dietary changes.
Sign up for emails
Subscribe
By providing your email address, you are agreeing to our privacy policy . We never sell or share your email address.
Thanks! You're all set!
Good news - you're already subscribed! Need help? Let us know at [email protected] .
An error occurred. Try again or reach out to [email protected] .
An error occurred. Try again or reach out to [email protected] .
Written by: Emily Downward | Last reviewed: February 2019
View References
Overview of ankylosing spondylitis. Spondylitis Association of America. Available at https://www.spondylitis.org/Ankylosing-Spondylitis. Accessed 1/21/19.
Ankylosing spondylitis. Genetics Home Reference, National Institutes of Health. Available at https://ghr.nlm.nih.gov/condition/ankylosing-spondylitis. Accessed 1/21/19.
Mogard E, Bremander A, Lindqvist E, et al AB0693 Chronic Widespread Pain is Common in Ankylosing Spondylitis and Undifferentiated Spondyloarthritis and Strongly Explains Impaired Self-Reported Quality of Life, Disease Activity, Function and Self-Efficacy Annals of the Rheumatic Diseases 2014;73:1033-1034. Abstract.
Comorbid fibromyalgia in ankylosing spondylitis, axial SpA, psoriatic arthritis, and rheumatoid arthritis. Spondylitis Association of America. Available at https://www.spondylitis.org/About-SAA/Updates/comorbid-fibromyalgia-in-ankylosing-spondylitis-axial-spa-psoriatic-arthritis-and-rheumatoid-arthritis. Published 1/13/17. Accessed 1/4/19.
Walsh N. A diagnostic challenge: when fibromyalgia coexists with AS. MedPage Today. Available at https://www.medpagetoday.com/mastery-of-medicine/rheumatology-mastery-in-as/62517. Accessed 1/4/19.
Fibromyalgia. Mayo Clinic. Available at https://www.mayoclinic.org/diseases-conditions/fibromyalgia/symptoms-causes/syc-20354780. Accessed 1/4/19.
Fibromyalgia. American College of Rheumatology. Available at https://www.rheumatology.org/I-Am-A/Patient-Caregiver/Diseases-Conditions/Fibromyalgia. Accessed 1/4/19.
Häuser W, Perrot S, Sommer C, Shir Y, Fitzcharles MA. Diagnostic confounders of chronic widespread pain: not always fibromyalgia. Pain Rep. 2017;2(3):e598. Published 2017 Apr 30. doi:10.1097/PR9.0000000000000598
Wegener S., Jacobs M. (2011) Referred Pain. In: Kreutzer J.S., DeLuca J., Caplan B. (eds) Encyclopedia of Clinical Neuropsychology. Springer, New York, NY. Available at https://link.springer.com/referenceworkentry/10.1007%2F978-0-387-79948-3_778. Accessed 1/31/19.
How is a person affected? Spondylitis Association of America. Available at https://www.spondylitis.org/Possible-Complications. Accessed 1/31/19.
Wu, Q. , Inman, R. D. and Davis, K. D. (2013), Neuropathic Pain in Ankylosing Spondylitis: A Psychophysics and Brain Imaging Study. Arthritis & Rheumatism, 65: 1494-1503. doi:10.1002/art.37920
Medications used to treat ankylosing spondylitis and related diseases. Spondylitis Association of America. Available at https://www.spondylitis.org/Medications. Accessed 1/21/19.
Pappas S. New treatment guidelines for ankylosing spondylitis. Rheumatology Network. Available at http://www.rheumatologynetwork.com/psoriatic-arthritis/new-treatment-guidelines-ankylosing-spondylitis. Accessed 1/21/19.
Recommended Reading